Poland: Mentor of Bank BPS Fakro MUSZYNA is voted Coach of the Year

Muszyna, Poland, December 27, 2011. Bogdan Serwinski, the long-time mentor of Bank BPS Fakro MUSZYNA (one of the two teams representing Poland in this year’s CEV Volleyball Champions League – Women), was awarded as “Coach of the Year 2011” by the daily newspaper “Dziennik Polski” as the annual gala “Aces of Malopolska” took place at “Radisson Blu Hotel” in Krakow. 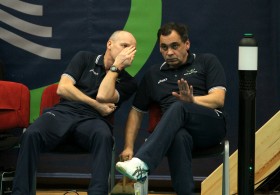 This event yearly celebrates 10 sports personalities from the historical region of Malopolska (Lesser Poland in English).

Sportsperson of the year was voted, as expected, cross country skier Justyna Kowalczyk, one of only two female skiers to win the World Cup three times in a row; the top-three positions were rounded out by tennis player Agnieszka Radwanska and ski jumper Kamil Stoch.

Mr. Serwinski could not attend the ceremony being busy with a match of the national league and therefore the award was presented to the spokesman of Bank BPS Fakro, Dawid Litwin.

“I feel really honored to receive this award on behalf of our head coach because there are many other top teams in this region, with the national champions in soccer and women’s basketball stemming also from this neighborhood. These clubs have got excellent coaches, so this is a good reason to see this award as extremely important to our coach and club” said Litwin while attending the gala in Krakow.

Italy: Round 16 Serie A2 Sustenium