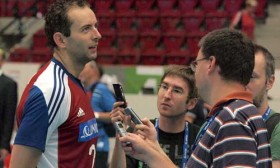 Jiri Popelka back in Plus Liga!

Actually, Jiri Popelka has his experience with both Polish League and Zaksa Kedzierzyn.

The president of Zaksa, Kazimierz Pietrzyk, said a few nice words about his new player.

“In 2003 we didn’t go very far, but Popelka was playing quite well. There were games in which he scored even 30 points.“

Now, Jiri Popelka is going to play as a receiver.

After he left Poland he gained more experience in Russia, Turkey, France, Italy and Germany.

“Last time he spent in Dubai, but something went wrong and he canceled his contract. We were negotiating with some other players, but finally we made a deal with Jiri” – Kazimierz Pietrzyk said.

Poland: Mentor of Bank BPS Fakro MUSZYNA is voted Coach of the Year

CL M: Victory for second round