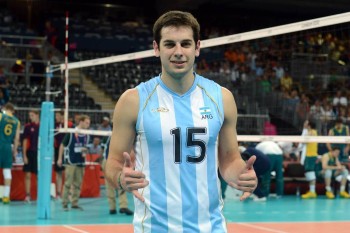 Having got the passport to the World Championship, Luciano De Cecco spent a few days in Brazil and gave a tour of his Santa Fe home to greet family and friends before traveling to Europe. Beyond the short break, the player showed his more human side to express their good wishes to the families of the tragedy of Rosario and also arranged a meeting with friends to collect food for charitable institutions.

The Piacenza´s setter announced it by his Twitter account (@lucianodececco) It will be a volleyball game in which participate players born in Santa Fe and, of course, the organizer. This is the second initiative that makes De Cecco so far this year since late July had led the first volleyball camp in the country.

While transiting his last days in Argentina, Piacenza prepare the last details of their season and, following an announcement of the Trentino´s press office- was revealed that De Cecco play a friendly against the new club of Sebastian Sole on September 20.

To read more news from those two countries click on Brazil or Argentina.

WCHY W: Brazil through to semifinals with...