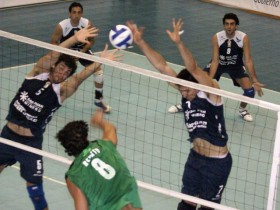 In straight sets UPCN deepens the fall of Catamarca Voley

The first set was even and very disputable. On one side was the trio of the hosts Stepanenko, Cabrera and Renato and on the other Bonini and Junior. The game was played point by point, thus to the first technical timeout the guests took the advantage (6-8) while to the second it was for the hosts (16-15). The break came when UPCN adjusted the block, with Junior who won two consecutive points and his team won 21-16.From that moment the game was embarrassing for the hosts and the set was closed with two points of Bonini.

The second set started better for Catamarca thanked to the attacks of Brazilian Renato, but the team of San Juan reacted and stayed to the two technical timeouts with 7-8 and 15-16. The development of the set was marked with more errors than wins for both teams, at the end UPCN had fewer errors and due to this won that set too.

The third set was much clear for the guests who only had to wait unforced errors of Catamarca that could not find the path leading them to the first places in the League. UPCN stayed with the technical times and got better result in this part of game (9 points).