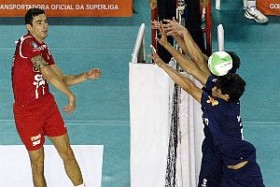 Cimed / SKY added 35 points on the result of general classification and, provisionally, holds the first place. But on Saturday, Sesi-SP with 34 points, and Vôlei Futuro (SP) with 33, come into court and may exceed Cimed / SKY.

In the decisive moments of the match, the pointer João Paulo of Cimed / SKY, stood out. At the end of the match, the spiker was named the player of the match and won the Trophy VivaVôlei. Both teams made a lot of errors in service, gaining negative points from the attack in the game.

“So this is Superliga. We have many errors and many serve aces in the game. You cannot take chances. It takes force to improve the counter-attacks. Today, both teams missed a lot in service. But this background decided the match in the fourth set, when we were better and failed in service. This improved the counter-attacks “, said the attacker.

The best scorer of the match was the opposite of Cimed / SKY, Rivaldo. The attacker scored 19 points. In Vivo / Minas, the opposite Filip and the pointer Lucarelli were the highlights, with 14 hits each.

The Olympic champion of Vivo/Mimas, Anderson , substituted Czech Filip during the game. At the end of the duel, Anderson lamented the lack of focus of the team in fourth set.

“It was a good game, especially in the first two sets. But in the fourth set, our team felt the defeat of the previous set and did not keep the concentration. It was a cold shower for the team “, said the attacker.

The teams will return to court next Thursday (16.02), when they will play at home. Vivo / Minas receive RJX (RJ), from 20h in Arena Vivo. Cimed / SKY receive Vôlei Futuro (SP), from 21h in the hall Riacho, in Contagem. It will broadcast live on channel Sportv.

BRA M: Round of five sets