ARG: First 2012 meeting of the National Referee Secretariat at the Argentine Volleyball Federation

The Regional Delegates of the Argentine Volleyball Federation National Referee Secretariat had this Saturday their first 2012 meeting to plan the new path of their area including naming the vacant official places and the necessary referees for the National Championships, the International Competitions and the International Courses for this year. 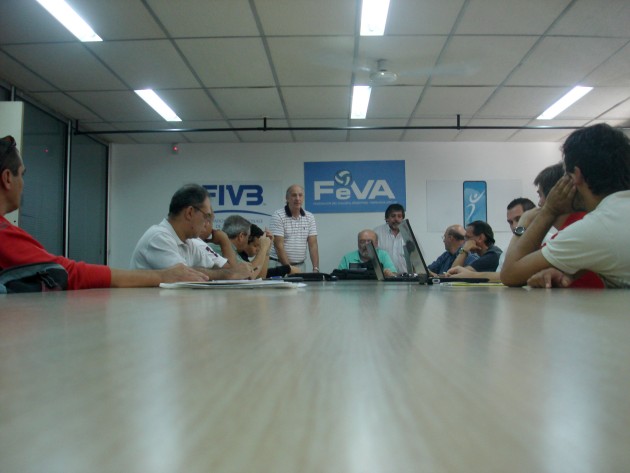 Also, FeVA Area Coordinator, José María Cuadrillero, expressed FeVA President, Juan Antonio Gutiérrez greetings for all those participating of the meeting that opened the 2012 year. The next meetings will take place in different cities in different regions of the country.

A new evaluation system for referees has been settled, effective from today. “We have the foreign support of people like Albredo Barbano, who created a data on all referees of the country without any interest but to help volleyball in the country” mentions Rezzoagli. “We will decide to make a referee instruction course and one for the supervisors that will evaluate them mid year in charge of one of the most experienced referees of the country, Guillermo Paredes” he added.

The SNA delegates have been elected since the year 2010 and as per the National Secretary it is very important to work together: “As organizing team it allows us to update the real roster of referees, how and where they worked, what courses they took and something very important, their development. Technical referees must have a continuous follow up including evaluation to obtain their improvement and adaptability to new international changes“.

Rezzoagli ended saying: “The SNA final goal is to follow and evaluate permanently all referees so that each of them has the knowledge for any kind of competition. We want to improve the national level of all of them. The better they make their job, the sooner they will become international referees“.