The sports undersecretary of the Province of Buenos Aires, Juan Manuel Lopez Gomez, has officially announced the renewal of the professional team in the Argentina Volleyball League for the season 2012/13. 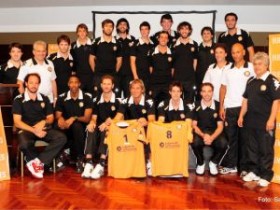 It has been already confirmed that apart from the captain Marcos Milinkovic and the Brazilian center Andre Radtke, the coach Waldo Kantor and his entire coaching staff will also stay in the club. In addition, the contracts have been extended with Valentin Forastiero, Rodrigo Ronda and Bruno Vinti.  Guillermo Garcia (return to Drean Bolívar), Mariano Giustiniano, Gaston Tissera and the Cuban Ihosvany Hernandez will not stay in Boca Rio. The libero Martin Meana, who signed the contract with Sarmiento Santana Textiles, will also leave the club.

Lopez Gomez is very pleased with the continuity of the project  for the next season and will work on the development of volleyball and social actions. Unlike in two previous seasons, he intends to start with the project early in August.

ARG: Mini Volleyball Festival for all in...