WL M: Brazil came back to beat Bulgaria and go to top of Pool A

Brazil came back from a set behind to beat Bulgaria 3-1 on Friday in their first of two FIVB World League meetings of the weekend. Leandro Vissotto and Todor Aleksiev were the top scorers. 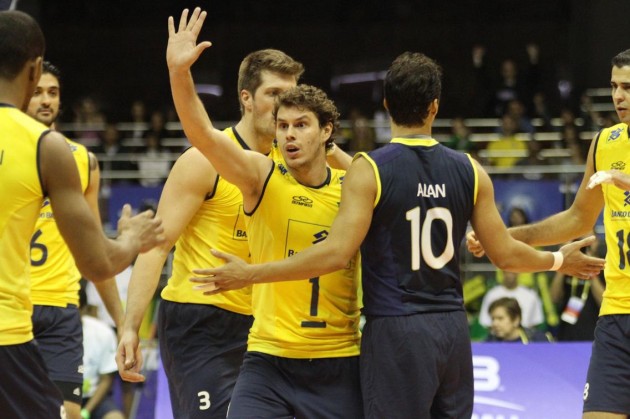 Bulgaria dominated the start of the first set, but inspired by the excellence of William Arjona and spiker Wallace de Souza, Brazil equaled the score at 20-20.They traded points, but with Bulgaria’s block stronger, an Eder error gave the Europeans the set (26-24).

Brazil struck back in set two, scoring four early points in a row, and keeping their lead. Brazil’s attacking power took them up to 17-10, and with the kills of spiker Leandro Vissotto crucial, they won the set 25-17.

Great blocking put Brazil up in the third set, as they got to 8-5, with Leandro Vissotto again leading the attack. Todor Aleksiev and Tsvetan Sokolov tried to put Bulgaria back on terms, but Brazil stayed ahead to win 25-20.

Brazil started the fourth set with the same strong defense work, jumping five points ahead to 11-6. Bulgaria were gutsy enough to fight back and take the lead in the set, at 19-18, but Brazil eventually closed it out to win, and take the match.

Leandro Vissotto was the match’s top scorer with 19 points. Todor Aleksiev was top scorer for Bulgaria with 15 points.

The victory puts Brazil at the top of Pool A, with 16 points. Bulgaria are second, with 14 points. The two sides meet again at the Nilson Nelson Gymnasium on Saturday morning at 10.10 local time (13.10 GMT) in the same venue.