GP: Brazil debuts with a strong victory at home 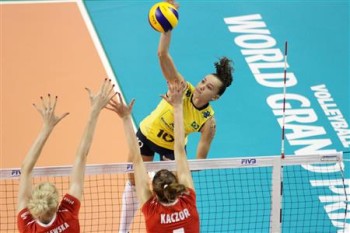 Poland had a great start and opened 8-3 in the lead. A good serving sequence from Juciely put Brazil back in the game. However, Polish opposite spiker Katarzyna Skowronska had a great performance and led Europeans to the victory on the first set 25-21.

Brazil jumped ahead 10-5 on second set thanks to an improved block and efficient counterattacks. After an intelligent attack by setter Dani Lins, Brazil opened 14-7 in the score. Setter Josefa Fabiola and spiker Sheilla Castro came off the bench to lead the Brazilian team to the victory 25-17.

A good performance on the block gave Brazil a 14-5 lead on the third set. Poland tried to improve its attack to get back to the game, but couldn’t break the tough Brazilian block. Middle-blocker Fabiana Claudino sealed the third-set victory 25-15.

Third set started close, with both teams showing their attack power. Brazil improved its defense and counterattacked to open 16-12 on the score. A Fernanda Garay attack gave Brazil the victory on the set (25-20) and on the match.

Brazilian spiker Fernanda Garay was the best scorer of the match with 20 points. Opposite spiker Katarzyna Skowronska topped the score for Poland with 16 points.