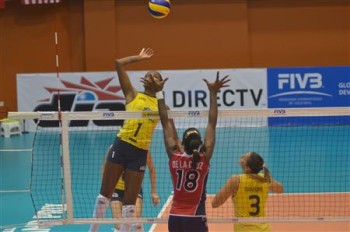 Dominican Republic started the first set very aggressive until Brazil’s head coach, Jose Roberto Guimarães, call an urgent time out at (8-12) after a consecutive great serve from Dominican Republic player, Priscilla Rivera. The lead of the Caribbean team continued through the second technical time out with an advantage of six points (10-16) after an attack of young player Jeoselyna Rodriguez. After the second time out, Brazil return to level up the set to a (17-19).The winning point for Dominican Republic came with a failed serve made by Brazil’s Michelle Pavão to end with (20-25).

Brazil’s team began the second set with a different game strategy emphasizing on the defensive line. A Block of (#10) Gabriela Guimarães tied up the game at point 12. Guimarães herself helped scoring the next points throughout the second technical time out that favored her team with a one point lead (16-15). Marianne Fersola (#4) of Dominican Republic spiked to tie up the game at point 17 following a great battle in the net of both teams. The set was finished in favor of Brazil (25-22) by an out kill of (#1) Annerys Vargas of the Dominican Republic.

The inconsistence of the Dominican Republic team helped Brazil scoring an outstanding lead of 11 points for the second technical time out that presented a (16-5) advantage. This continued to end up the third set at (25-12) with an error of (#16) Yonkaira Peña of Dominican Republic that gave Brazil the lead of 2 sets to 1.

Brazil continued their fast game through the fourth set and finish it at (25-18).