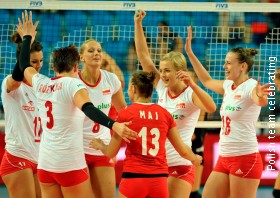 The game started with a few failed serves on both sides. Then this tendency was changed by Katarzyna Skowronska-Dolata, who made an ace to give the Polish team a  4-3 lead.

Skowronska-Dolata played admirably from the first ball, supported by the rest of the team. She was the main reason why Poland with two points more on their account went to the second TTO (16-14). After this, Anarbayeva failed her attack on the right wing (18-14), made coach of her team Oleksandr Gutor absolutely convinced to ask for a time out. Nevertheless, Poland’s advantage increased to 5 points (20-15) by Zuzanna Efimienko‘s block. Sana Jarlagassova kill brought one more point for the Kazakh team, but after Efimienko’s and Skowronska-Dolata’s spikes and a succesful challenge verification for White-Red team it was even 23-16. One more time out for Gutor did not change anything – Poland romped to a victory 25-17 with a Joanna Kaczor spike on right wing.

Everything was fine on the beginning of the second part of the game, but Poland lost their confidence very quickly. Kazakhstan, leading with one point advantage 5-4, forced Polish coach Piotr Makowski to talk with his team on time out. Gutor’s Kazakh team started to fail some actions, letting Poland to take a control over their game once again. Kazakhstan tried to come back into the match, but was downhearted each time. With the score 22-14, nothing could help Gutor’s team to change the history of this set. Kazakhstan lost 25-17.

Poland started well the last set of that clash, gained a five-point advantage on TTO 8-3. The domination of Polish team was overwhelming in each element – when the score was 16-6, Poland had 9 points by block in compare to Kazakh 2 and 6 aces whilst Kazakhstan had only one. Poland easily won over Gutor’s team in set without history 25-11.

MVP award of that match went to the Katarzyna Skowronska-Dolata, who was the best Polish player by this evening and led all scorerswith 17 points.

GP 2014: Lucia Bosetti has been successfully...