It was an easy day in the office for the team USA. Right from the start, the North American side took control of the match and never let go. The Algerian women tried their best but could not pose a serious threat to the potent USA team. By the second technical time-out in the first set it was already 16-5 to the USA, and it was clear that this would be a one sided duel. 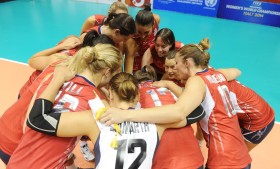 Rachael Adams led all scorers with 11 points on nine kills. Cassidy Lichtman pitched in nine points off of six kills.

The Algerians were led by Safia Boukhima and Aicha Mezemate, who each tallied five points.

The second set saw a couple of new U.S. players on the court, who continued to dominate the newbies from Algeria. Coach Kiraly let all the players feel the court in “Pionir” Hall of Sports in this match. In the end, it was an easy 3-0 sweep for the Americans, who are looking good ahead of the upcoming duels in Pool F. On the other side, the Algerians added 38 more points to their overall score, summing up now a total of 144 points in their four matches combined.

For more information about this competition, read World Grand Prix 2013.