Coming back from an 0-2 deficit, Japan rallied back to beat Germany in five sets. 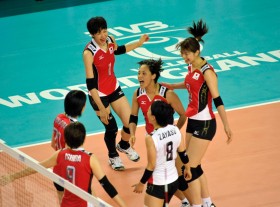 Joy after scoring the point

In the first set, the match was very close from the start. However, it was the German team that eventually prevailed. The Germans were much more focused on the game. They played well especially on the right wing and was unstoppable to Japan’s block. Christiane Furst – who tipped a smart dink behind the block to pull ahead to an 8-4 lead – and Corina Ssuschke-Voigt finished their spikes with perfection. Both players were supported by good digs by Lenka Durr.

Japan coach Masayoshi Manabe called for a time out when it was 14-7 for Germany, but Germany’s block was still too strong for his team. Finally, Giovanni Guidetti‘s team led 16-7 on the TTO. With such a brilliant defence, Germany was too strong for Japan. Japan could not find their rhythm. However, Kanako Hirai’s substitution into the match changed the game for Japan – she finished three spikes on the right wing in a row helping Japan to come back to the match for a while and worrying Guidetti enough to call for a time out. Despite the short scare, the time out calmed down the game of his team therefore Germany pick up quite easy victory 25-18.

Miyu Nagaoka stayed on the court and finished first spike for 1-0 to Japan. Second point went to them as a result of great block. Then, Kimura finally woke up and seemed to be a leader of the team alongside with Nagaoka. Kimura‘s ace brought Japan 4 to a 6-2 advantage. After a strong block on Kimura and then nice Kozuch‘s spike on Japanese block for 10-12, Manabe asked for time out. Few points gained by Heike Beier and consistent game of Guidetti’s team made them possible to take an advantage 16-14 on second TTO, after scoring 5 points in a row. Maren Brinker scored from the middle of the net for 21-16, but after good spike of Nagaoka and bad one of Brinker, there were only 3 point advantage for Germany so Guidetti called a time out for his team. Smart Beier’s dink set the score at 23-19 pushed Germany to win 25-20.

The third set started similar to the second one with Japan playing consistent volleyball. Two kills from Kawashima set the score 5-3, but they could not increase their 2-point advantage until 11-8. Ishii’s ace for 13-9 forced Guidetti to change Brinker for Thomsen, but it did not make any problems for Masayoshi‘s team, who still led 16-11. Guidetti asked for a time-out when Japan led 17-13. Germany cut down the distance to the 16-18, although Japan came back to the match gained some points after smart kills (22-16). Eventually, it was impossible to  for Germany to catch up – Japan won the set 25-20.

In fourth set, the game was very close from the beginning – the first team who took more than one point advantage was Germany after good Brinker‘s block for 5-3 and then 7-5. Both teams failed their serves, allowing Germany to lead 8-6 at the first TTO.  Kozuch kills for 12-9 was not enough to stop the Japanese team, which equalize the score for 14-14 and 17-17. The game was very close, but after Kimura‘s ace, foul hit of Christane Furst and out spike of Kozuch, Japan took two points advantage 21-19 and later 22-20. Brinker rebuilt Germans forces at the end of fourth set. Shinnabe attacked to the horizontal band of the net and as a reasult of checking this situation by the challange system, referees decided to keep up their Japandecision for 22-22. Hirai and unstoppable leader of Japanese team Nagaoka finished their actions for 24-22 and then best  player blocked Jennifer Greeties in the action on the left side of the net (25-22).

Both teams started the tie break well, not allowing their opponent to take a big advantage. When the set was tied at 3-3, Nagaoka served an ace and then Kozuch was stopped by double block on the Japanese side. Guidetti buoyed his team on time out when the score was 7-5 for the opponent, but it did not changed the game of European League winners. Thomsen and Brinker went onto the court in places of Beier and Geerties and produced a great block of Ssuschke-Voigt for 6-8. Phenomenal digs by Germany was broken by an outstanding spike by Nagaoka. However, Manabe was forced to called for time out, when his team had only one point more than Germany (10-9). After Nagaoshi‘s spikes, Germany came back with great block of Furst on Ishii. In the end, it did not distract Manabe’s team, finishing the match with a Shinnabe attack for 15-12.