In the early evening of Tuesday, the STJD (The Superior Court of Justice in Sports) judged on the doping case of the spiker Natália, currently playing in Vôlei Amil, and on occasion defended colors Unilever. The player was sentenced to 60 days of suspension. 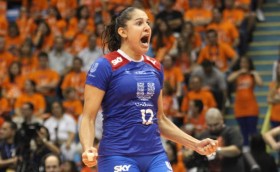 In the first trial in June, Natália has been cleared on the grounds of error of the laboratory that performed the test. However, errors in the process were found and the same was reviewed and sent back to the trial.

All voted for the conviction Natália but three of them asked for punishment of 60 days, and other three wanted 120 days. In this case, as there was a tie, the player was sentenced to the smallest punishment, two months of suspension.

However, having already served the preventive part of the sentence, the player will be only 27 days without being able to play and should be released to perform in Vôlei Amil. She expects her debut in this season’s Superliga in late September.

Outside the courthouse, Natália declared her clear conscience with what she did and claimed that now she just wants to rest and get back to training as soon as possible.

See the profiles of Natália and Vôlei Amil.