BRA M: Sao Bernardo – “If the police had not helped us…”

The Brazilian Volleyball Federation will have a lot of work to do about the recent clash between Caramuru Volei and Sao Bernardo. 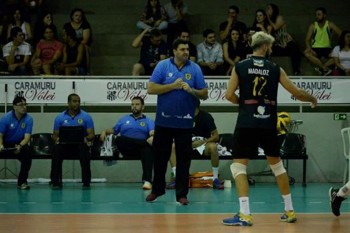 The game ended in a shameful fight in which both head coaches were allegedly involved, while now each side has its version of the story. Sao Bernardo crew complain that they were not safe after the match.

“This is something their coach Fabio Sampaio simply does every time. It’s unbelievable. If the police had not helped us after the game the things would have been even worse. Our locker room was invaded after the match and the security was unprepared for this kind of situation. Their coaching staff must be punished. Fabio did not even shake hands with us after the match. Not to mention that our locker room was filthy and smelly on the game day. Of course that we will complain to the CBV,” said Sao Bernardo head coach Douglas Chiarotti.