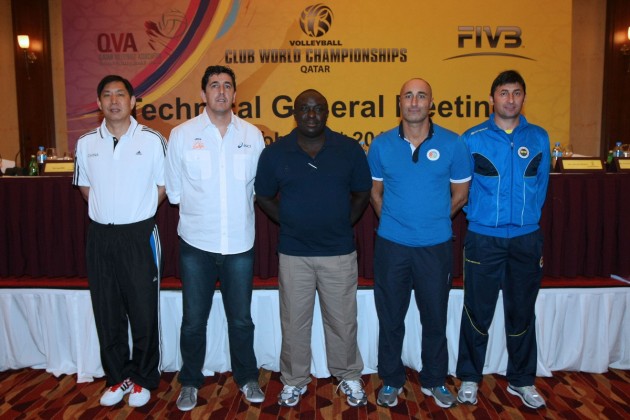 Sheilla Castro, Jacqueline Carvalho, Thaisa Menezes, Fernanda Garay and Adenizia Silva, who all played key roles for the gold medal in London, are the core of the South American squad.

Luizomar de Moura, who has coached several junior national teams of the South American house power, is confident about his side opportunities to emulate the victory attained in the British capital last August.

“We hope to enjoy a great championship and we have very high goals,” de Moura stated during the press conference held after the general technical meeting on Friday night.

Defending champions Rabita Baku of Azerbaijan and Fenerbache of Turkey, champions of the 2010 edition, are two other solid contenders for the top honors here along with Bohai Bank of China. Kenya Prisons and Lancheras de Cataño of Puerto Rico are representing Africa and NORCECA in the six-team competition.

Rabita Baku, Sollys-Nestle and Bohai Bank are playing in the tough Pool A while Pool B consists of Fenerbahce, Kenya and Lancheras.

The women’s competition begins on Saturday with a single crucial match between Kenya and Lancheras at 10:00 am which can be decisive for the ticket to the semifinal phase.

Here the excerpts of the coaches’ statements during the press conference:

Wang Baoquan coach of Bohai Bank: “We are going to play against very big teams in our pool and hope to learn from them. The other two teams in our pool are very strong and won’t be easy for us but nevertheless we will do our best against them.”

Kamil Soz, coach of Fenerbahce: “We were here two years ago and managed to win the championship which created a great excitement in Turkey. Ours is a football club but now many people are following volleyball and we want to keep it that way.”

David Lung’aho, coach of Kenya Prisons: “We really want to avoid the early elimination of the past two years and we want to change that. We are back in Doha for the third consecutive time and we have learned a lot playing against the best clubs in the world”.

Marcello Abbondanza, coach of Rabita Baku: “It is a pleasure to compete here again and we are prepared to try to win again as we did last year. We have many new players in our team but all of them are very well motivated to play in this great tournament.”

Luizomar de Moura, coach of Sollys-Nestle: “We are very happy to be in Doha again and we hope to enjoy a great championship. We have very high goals and my team includes five Olympian players with Sheila, Jaqueline, Fernanda, Thaisa and Adenizia.”

FRA M: Toulouse won in the first round