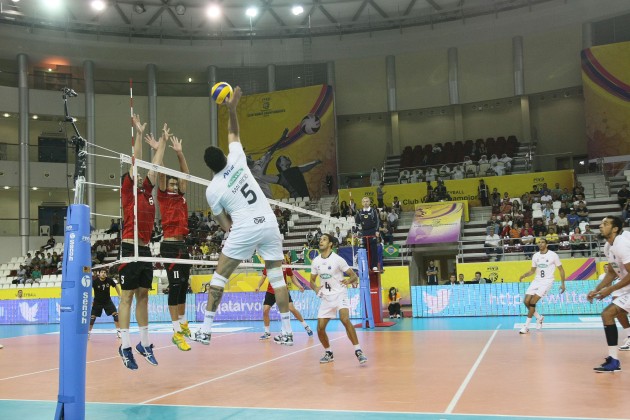 Sada Cruzeiro, who leads Zenit Kazan (2-0) by one point in Pool A, out-served Al Rayyan 7-1 and had the 9-8 edge in service aces. The winners gave away 35 points in errors to 28 by the losers.

Marcos Leal broke a tie at 7-7 with a spike down the middle for Sada Cruzeiro. De Souza crushed the ball with his spike and then scored with a push attack for a 12-8 lead in favor of the Brazilian club. Al Rayyan called time-out. The difference was still of four points (16-12) at the second pause despite the efforts of Lee and Mendez from Al Rayyan. The Sada Cruzeiro machine was working in high gear and increased the gap to 20-13. A streak of attacks led by Mendez and Oivanen cut the lead to 22-18. Cordeiro’s attack was wide for 23-20 but de Souza smashed and Marcos Leal blocked for the last two points and the 25-20 score.

Oivanen’s offense combined with some sloppy plays of the opponents for an 8-4 lead in favor of Al Rayyan in the second set. The difference was 16-14 at the second technical time-out but Sada Cruzeiro managed to equalize the score at 16-all with a spike by De Souza. At 18-18 Oivanen’ spike was ruled wide and then confirmed by the video. De Souza followed with a big cannon-shot for a 20-18 score. De Souza served short and then Bratoev scored after a sensational defensive play to keep the ball alive for a tie at 20-all. Rodrigo blocked De Souza but he didn’t in the next play. Mendez gave Al Rayyan the one-point lead 22-21 but De Souza landed another shot to level again.  Leal served an ace for 23-22 but the spike of teammate Ferraz sailed long. Then blocked Borges for Al Rayyan’s set-point and Mendez scored big for the local side success 25-23.

Sada Cruzeiro held a one-point lead when teams arrived into the first TTO. Borges served an ace and De Souza killed off Al Rayyan’s wall for a 10-7 advantage. Bratoev reduced the gap to 13-12 but Marcos Leal counterattacked. The Brazil’s club led 16-12 after Cordeiro planted a tremendous spike in the Al Rayyan soil. The blocking skills of Cordeiro produced two more points to build a 22-15 commanding lead. Sada Cruzeiro cruised to a 25-16 win.

The South American team was in front 8-7 in the fourth set. Lee tied it for Al Rayyan but De Souza responded from the other side. Leal hit a spike to increase the gap to 11-9. Sada Cruzeiro improved to 16-12 with a stubborn block by Borges. Al Rayyan was not going to quit and came back to tie at 18-18 as Sada Cruzeiro played flat footed.  At 22-21 De Souza hit a spike and Yiandy Leal served an ace. One play later Borges scored the final point for 25-22.