After a dramatic tie-breaker in the finals in Kraków against Germany, Russia won the gold medal in the 2017 CEV Men’s Volleyball European Championship in Poland! 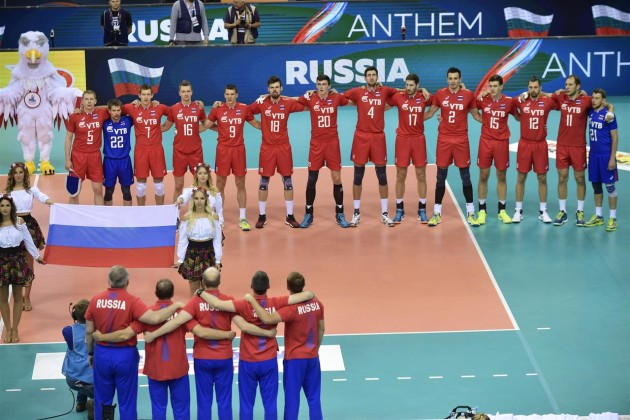 Russian National Team bumped into the strongest obstacle so far in EuroVolley 2017, while Germany proved it was not a coincidence that they managed to reach the finals, which was their best-ever achievement in the Continental Championship history. They were the only team to won a set against Russia in the tournament, and not one but two. Still, Russia kept their invincibility in EuroVolley 2017 and grabbed their third European gold medal as an independent country, 14th if Soviet Union’s triumphs count.

The „Zboranaya“ furiously started the grand finale. By blocking Grozer three times and thanks to three mighty serves of Volkov, Russia got 7-2. Grozer turned the initial nervousness into smashing serves for a tie 14-14. Russia made a decisive step toward winning the first set at the 17-16 lead by scoring three points in a row, for which Mikhailov was the most deserving player. At the end, it was 25-19 for the Russian NT.

In the way Russia opened the first set, Germany began the second. Monster serves by Krick and lack of focus of Mikhailov pushed German side to 9-4. A couple of Kaliberda‘s serves totally disturbed Russia’s reception, while Grozer’s hits were untouchable for the Russian block 18-11. Russia came to 23-20, but it did not scare Germany as they scored next two points for 25-20. The Russian players complained to the referee on the last point in the set, claiming that the ball touched the floor before Kampa made a „pancake“. This made Grozer quite angry as he exchanged a few angry words with the rivals through the net. All in all, Russia has lost their first set in the tournament, 25-20.

Russia made a gap early in the third set 7-5, and soon made it even wider thanks to the unstoppable Mikhailov in the attack and brilliant reception of Volkov, 12-8. Germany struck back with a 6-1 run in which Kampa distributed balls all over the net, to Grozer, Fromm and Krick, preventing Russian block to do their job. From that moment on, the two teams traded points back and forth until Shlyapnikov’s joker Zhigalov made an ace for 23-21 for Russia. Volkov finished Germany off in this set, 25-22.

On the wings of Kampa, who perfectly distributed balls to his teammates, Germany swept Russia in the fourth set. Everything went well for the Germans, which forced Russia’s coach Shlyapnikov to replace Grankin, Volvich, Berezhko…It was in vain – 25-17 for Germany.

Russia opened the tie-break in a good manner, taking a 2-0 lead. Germany hit back with a 5-0 run. At 8-8, Grozer fell down, holding his ankle, causing his fans in Tauron Arena to have cold sweats. But, he was able to continue the match, had a few more razor blade hits, but ultimately, the Russian block made the difference, 15-13.

Believe it or not, Russia made 22 kill blocks and 14 aces! Maksim Mikhailov scored 19 points for the winning side, while Georg Grozer notched 27.

The statistics of Russia are accidently being counted twice, they only scored half that many aces and blocks.