Estonia and Turkey aim to keep perfect records in the 2018 CEV Men’s Volleyball Golden European League as Round 4 of the tournament that replaced the FIVB World League Group 2 by the significance sets off tomorrow, May 30. 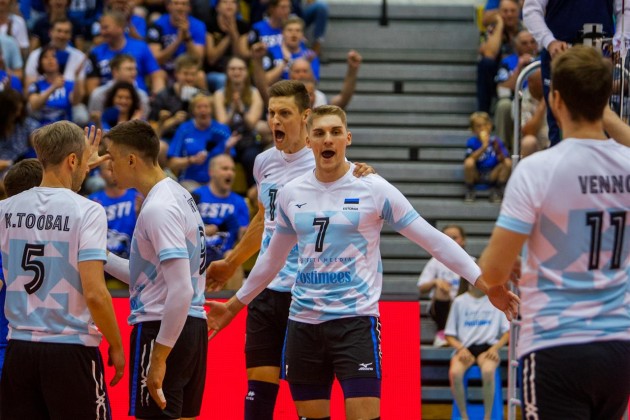 The absolute leaders of the 2018 CEV Men’s Volleyball Golden European League after three rounds with 9 points and a 3-0 record, Estonia, will meet Sweden on the road in Nyköping in the next round of Pool A. These two met in Rakvere, four days ago, and the team from the Baltics prevailed by a 3-1 (Robert Täht scored 16 points). Sweden is nailed to the bottom of the standings with no points and 0-3.

„We expect another difficult game. I believe that Sweden will be highly motivated for this match and we need to be more focused than in the last match,“ said Gheorghe Creţu who will lead Estonia as the head coach for the 100th time.

Creţu will not have a 19-year-old libero Silver Maar at the disposal as he will stay in his home country to take a school exam. Albert Hurt will be the new name in Estonia roster.

As for the last year’s bronze medalists Sweden, their coach Johan Isacsson needs to have an immediate reaction by his players tomorrow in order to stay in contention for the Final Four.

„We are looking forward to meeting Estonia again. We are basically neighbors, have met a lot in recent years and it is always tight and action-packed,“  Isacsson said.

Slovakia will face 2017 CEV European Championship semi-finalists Belgium in their capital Bratislava after an intense match these two played four days ago in Aalst (3-2 for Belgium – Igor Grobelny and Gert van Walle scored 17 points apiece). The „Red Dragons“ are the second-placed with 5 points, Slovakia is the third with 4 points.

Just like Estonia, Turkey also have a perfect record after three rounds but one point less on their account. Their next challenge will be the 2017 FIVB World League Group 2 winners Slovenia (the last-placed, no points) who compete in the 2018 Golden European League without several major players, like Tine Urnaut, Mitja Gasparini, Dejan Vinčić, and many more, by the decision of their coaching staff as their head coach Slobodan Kovač said in an interview to our website. As it was not enough, but one of Slovenia’s key players at the moment, Tonček Štern, suffered an injury in Round 2 and most probably won’t play against Turkey in Samsun.

Ukraine and The Netherlands will face each other in Ivano Frankovsk after a tie-breaker in Apeldoorn, in the last round, in which Ukrainians prevailed by a 3-2 (Oleh Plotnytskyi scored 19 points).

Both sides have 5 points on their accounts.

Portugal exposed the weaknesses of Finland in Round 3 of Pool C and now hope to conquer the Czech Republic away in Prague.

As for the Czechs, the opinion that prevails among their players and coaching staff is that they are favorites in this match. In case of winning, they will move from the bottom of the standings (3 points, as much as third-placed Spain).

„The situation in the pool is tangled up. Every set can make the difference in the final count. On Wednesday against Portugal, we want to confirm the rising form and win, preferably with three points,“ said Michal Nekola, the head coach of the Czechs. Matyáš Démar, who skipped Round 3, will likely return to the Czech Republic squad.

Finland, the leaders of the pool, will play the home match against Spain, in Turku. The last time these two met was last year when the Scandinavian side defeated Spain by a 3-1 in the qualifier for the 2018 FIVB World Championship. Last Spain’s victory over Finland dates back to 2008 in the FIVB World League.

SILVER EL M: Shooter’s showdown between Gjorgiev and Buchegger is expected in Round 4