WC 2019 W: China take revenge on USA and have clear path to title

China National Team is very close to clinching the title at the 2019 FIVB Women’s Volleyball World Cup in Japan as they beat the USA on Day 7. 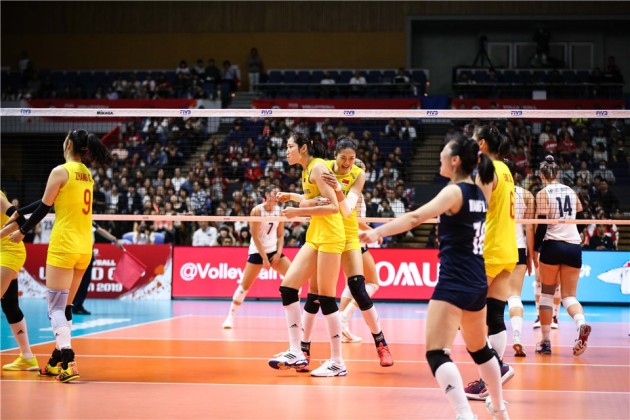 China are on the seven-game winning streak (no defeat) at the World Cup after they beat the United States on Day 7.

The team coached by Lang Ping recorded a clear victory, 3-0 (25-16, 25-17, 25-22), against rivals who were also undefeated prior to the match in Sapporo. Surprisingly, it was a one-sided game in which North American side showed nothing from their play that put them at the top of the charts.

This way, China came close to winning the title in the round-robin tournament, given that the USA were considered their biggest threat and now they have 3 points less compared to the Asian side four rounds before the end of the competition. China also took revenge on the USA for losing the FIVB Nations League final this summer.

The captain Zhu Ting was the best score for the winning team with 23 points, including 5 kill blocks. Karsta Lowe scored 10 points for the USA.

Russia and the Netherlands are the only two teams that can interfere into the battle for the gold medal with China and the USA but with significantly smaller chances. The “Zbornaya” downed Argentina in straight sets, while the Dutch team prevailed over South Korea in four sets.