Serbian wing-spiker Brankica Mihajlovic is one of the most valuable additions to the roster of France’s standout RC CANNES for the current season. The player born in Bosnia & Herzegovina spent the past season by playing first for Volero ZURICH. 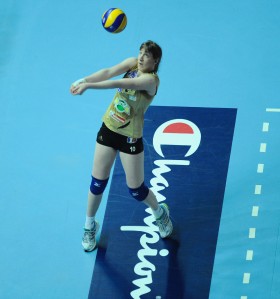 “We are all very happy with what we have accomplished through the first half of the season” she says. “Even though some players suffered injuries we have continued to play our best showing that we are a very solid group where we are always ready to help each other. It is nice to be part of this group! We are still in contention for the national cup, we have qualified for the Playoffs 12 of the CEV Volleyball Champions League and we are topping the charts of the national league, so there is nothing we can’t be happy with” adds Mihajlovic.

The player born in Bosnia & Herzegovina spent the past season by playing first for Volero ZURICH and then moved to Korea for a few months. “That is my first season with this club and I have to say that it feels like a family. Everyone is very nice and willing to help. I am enjoying every single day and I hope this positive feeling will accompany me also in the future”.

Mihajlovic has definitely high expectations for the remainder of the season: “We want to win the national league once more this season but we do not feel any pressure, we simply try to play our best. I also want to thank our fans who are always supporting us so passionately and loudly”.

This coming January 16 RC CANNES will be playing Azerbaijan’s Rabita BAKU – the world’s club vice world champions – for the Playoffs 12 of Europe’s most elitist competition. “I have never played Rabita before but for now I am totally focused on our next matches in the domestic arena and then we will prepare for this clash. I look forward to it knowing that it will be tough and we’ll have to be fully concentrated as we are confronted with an extraordinary opponent. However, we are also strong, so we have our chances”.

During the prelims of the CEV Volleyball Champions League, Mihajlovic crossed her ways with her former team, Volero. “It was weird when we went to Zurich and I got to see some of my friends that were standing on the other side of the net. However, as we played them here in Cannes, I already felt more comfortable. We played Volero once more at the international tournament in Basel and there everything was fine, as I was no more emotionally moved by the fact that I was playing my former team. However, I am a professional player and I always give my best even if friends are my opponents. Matches are matches and friendship is a different story”.

Mihajlovic feels comfortable also with the major stars of the team, Nadia Centoni and Victoria Ravva. “They have really helped the young players settle down and feel comfortable. If some of us do not understand French, they are always ready to help by translating for us. They definitely made our transition smoother and easier. Moreover, I can improve my skills and learn something new from our head coach Yan Fang”.

Mihajlovic joined another member of Serbia’s national team, Milena Rasic, in Cannes after they had shared their Olympic adventure this past summer in London. “Milena had already explained to me what it was to be here in Cannes and it was good to know somebody when I came even though everyone is very open and ready to welcome the last additions to the group”.

For more news from this competition click on France.