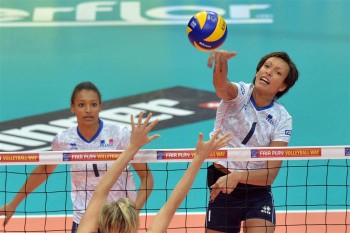 There was not much to separate the two teams early in this much-awaited duel in Zurich’s Hallenstadion. However, the Czechs, who committed only one fault in the first set, led 16-14 at the second technical timeout. French head coach Fabrice Vial sent in Leyla Tuifua and Mallory Steux. It helped as France improved their offensive game and came closer towards the end of the opening set. Still, it was not good enough. The Czech Republic ended the first set 25-20 in their favour.

“Les bleus” quickly needed new ideas to catch up their strong opponents from Eastern Europe. However, the team of Carlo Parisi was perfectly prepared for tonight’s game. Nine blocks in two sets were the proof for an excellent game plan. It was a demonstration of precision and speed with the young Czech team leading 8-2 and 16-4 at the two technical timeouts. Vial replaced captain Anna Rybaczewski and Christina Bauer, but it did not help. After 45 minutes, the Czech Republic cruised to an undisputed 25-9 set win and led in no uncertain manner 2:0.

The story of the match did not change in the beginning of the third set. The Czech team kept the upper hand by brilliant teamwork and captain Aneta Havlickova on fire (17 points in three sets). However, a 20-13 lead was not enough for the Czechs to conclude. France bounced back bravely with a six-point rush to reduce the gap to one point at 19-20. The French servers put a lot of pressure on young Czech receiver Andrea Kossanyiova to turn tables at the end of the third set (25-23).

France, with more confidence after the unexpected set win, kept momentum in the fourth set. On the other side, the Czechs could not tie in with their excellent performance in the first two and a half sets. France led 8-5 and 16-12 at the technical timeouts and needed two more points at 23-19 for their set win. Even though the Czechs bounced back to 22-23, Christiana Bauer and Myriam Kloster closed it out for France. The Czech Republic had tripled their errors from three in the first two sets to ten in set three and four.

It seemed as Alfred Hitchcock was the author of the fifth and deciding set. Both teams showed great fighting spirit and neither France nor the Czech Republic were able to extend their lead to more than one point. At 14-13, the Parisi team had their first match point, but could not conclude. It was now a unique battle of the two number 4’s, Aneta Havlickova and Christina Bauer. Bauer saved three other Czech match balls before Havlickova sent the Mikasa long, bouncing the French team in heaven.

To read more news from this competition European Championship 2013 W.