The injury problems of Rote Raben are like a red thread through the season: In November, Renata Cristina de Jesus Benedito had a fracture of the fibula capitulum (since two weeks she is back in action), Yessica Maria Paz Hidalgo falls due to a serious knee injury until end of season. And now even the opposite player and best scorer of Rote Raben, the Cuban Liana Mesa Luaces, had in the European Cup game a torn muscle in her right calf 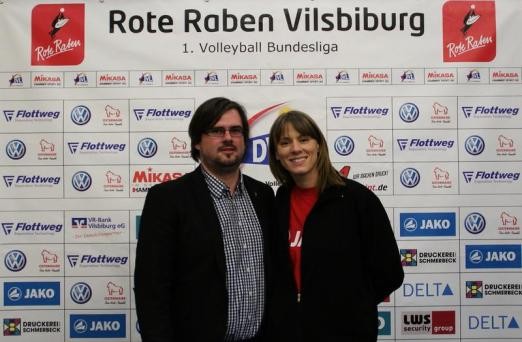 High burden of tight game plan is having an effect

“We have really a blessing in disguise,” says Klaus-Peter Jung Kronseder: “Steve Welch, the agent of our middle blocker Jennifer Todd offered us when he heard of Lianas injury, the Serbian Mirjana Djuric. And of course we took her.” For Rote Raben Djuric is not an unknown fact: She was it who put the field defense of Lenka Dürr in the first round of the CEV Cup duly under pressure: But now she has dissolved the contract with Khimik Yuzhny and was looking for a new club. “Now she can return to training under competitive conditions and will support our team,” said André Wehnert, Director Sports, and adds: “Due to the tight game plan this season we’ve had already had a very high burden for all team members through failures. Mira is now a big help.”

Still it is unclear when she will be eligible to play for Rote Raben in the Bundesliga. Since she was already active for her former club Khimik Yuzhny in the European Cup, she can not be used in the CEV Cup. Also for the DVV Cup final on 4 March in Halle / Westfalen Djuric is not eligible to play. “She’s a real gain for us, especially in view of the play-offs,” said coach Guillermo Gallardo. Also Mirjana “Mira” Djuric is “very happy to be a part this great team. The team unity had already impressed me during the European Cup match and I look forward to have a great time in Vilsbiburg”, said the 25-year-old.

Switzerland: Three from four teams in 1/8 final of Challenge Cup