Two major matches are waiting in the coming days for the Rote Raben: On Wednesday, they start at 4:30 o'clock in the morning to the Russian Krasnodar, where on Thursday 19 January, 19 o'clock, the return match of CEV Cup fourth round against Dinamo Krasnodar. From there it goes directly to Hamburg on Friday, where on Saturday 21 January, they will be received by 18 clock in the new CU Arena of Hamburg. 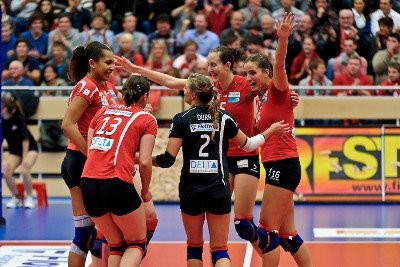 In the 1:3 defeat in the first leg Lina Meyer, Lenka Dürr and Co. showed indeed that they may play at the highest European level and especially in the adoption and defense field were equal, but in the elements of attack and block, they were inferior. Theoretically, it is still possible for the team of Guillermo Gallardo to jump into the quarter-finals. “But this is of course extremely difficult, after all, Dinamo Krasnodar was already in the first leg a bit too big for us,” said the Argentinian. The Rote Raben would have to win the return match in Russia (no matter at what level) and then also the Golden Set (to 15 points).

And that will make even more difficult than during the first clash, only 9 of the original 14 registered players make the trip: In addition to the long-term injury Yessica Maria Paz Hidalgo alongside Liana Mesa Luaces (hamstring) and Jennifer Todd because of persistent knee problems got one weeks rest of team physician Dr. Karl-Heinz Attenberger. “This is obviously a precaution, we want in terms of the Bundesliga to risk anything,” said team manager André Wehnert.