Generali Haching has won its fourth DVV Cup title. They won the thriller game against Moerser SC 3:2. 10,100 spectators provided a magnificent setting for the thrilling final. Top scorers were Jan-Willem Snippe at Haching side, and Ewoud Gommans for Moers. 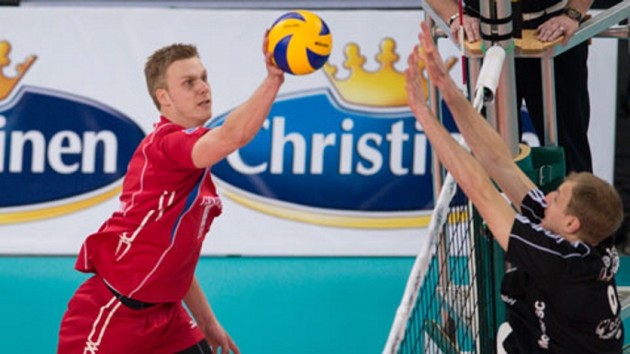 10,100 spectators provided a magnificent setting for the thrilling final. Top scorers were Jan-Willem Snippe (25 points) at Haching side, and Ewoud Gommans (16 points) for Moers.

Haching won the first set, but Moerser improved their performance and evened to 1:1 in second.

In the third set Moerser got “hot” and celebrated each point with euphoria. This atmosphere led them to wining the third set.

Haching found its game in the fourth set and afterward they wouldn’t leave anything to chance. The set kept going point by point, with Haching constanly in a lead. After wining the fourth one, fifth set was easier for them. They gained a quck lead – 12:5, and after Moerser’s unsuccessfull try to get back, Haching celebrated with 15:10, which got them the German Cup title.

Hirsch said after the game: “The decisive factor was the team spirit in the end of the game. We had more team spirit. We showed more emotion. I am so happy we won.“

“It was an amazing feeling to lead with 2-1 records. But in the end we missed the last bit of luck, to create a sensation“, said Broshog.