As they start out their national playoff series this Sunday taking on VC DRESDEN, BERLIN Recycling Volleys have presented their new team shirts this week supporting their title sponsor’s environmental campaign in drawing the public’s attention towards the importance of sustainable usage of resources. Felix Fischer, Roko Sikiric, Paul Carroll and Kawika Shoji presented the jerseys. 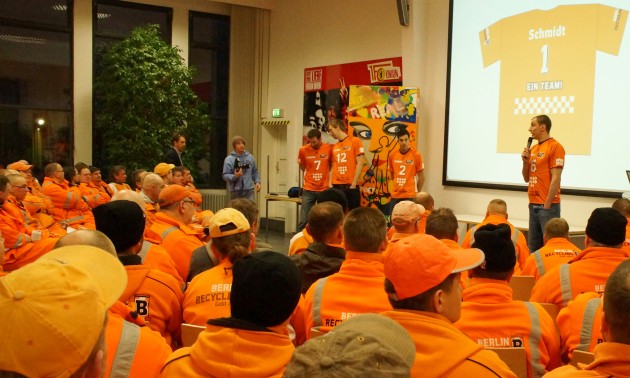 Promoting their environmental campaign “My Heart for Recycling” the team’s title sponsor makes use of the playoff start in Germany’s Bundesliga as they have created a new team uniform’s design. The Playoff 12 contestant of the 2013 CEV Volleyball Champions League from BERLIN and the recycling company yet want to take responsibility for a clean city and direct urban attention towards the importance of recycling for an ecological usage of valuable and limited resources. Wearing the checked pattern heart on the front side of their shirts, the team of head coach Mark Lebedew will promote this idea throughout the playoff series.

Starting out their jersey campaign at the company’s headquarter at 5.30 am, 150 drivers and staff members of Berlin Recycling GmbH were welcomed by their general manager, Hanno Thielmann, the dancers of the “Berlin Dance Team” who usually perform at BERLIN home matches and the players Felix Fischer, Roko Sikiric, Paul Carroll and Kawika Shoji. Berlin Recycling’s general manager, Hanno Thielmann, used the presentation of the new shirt design as an opportunity to conjure up the team spirit of the company’s employees and the team of BERLIN Recycling Volleys: “Last season we saw what a strong team can achieve. That is why we now want to pool our strengths to be successful as a collective in the playoffs.“

All employees eventually received their own jerseys with their names printed on the back to support the side of BERLIN during the playoffs in the original club colours. “Every day, we can see in the city how reliably our colleagues of Berlin Recycling GmbH work. We now want to give off our best to hopefully retain the national title and celebrate together with you” middle blocker Felix Fischer (pictured at the left) said.

The campaign has also been a benefit for the team youth section. In order to promote their campaign, every ace in a home match by a player of BERLIN is rewarded with 50 € for the SCC JUNIORS. During the regular season Robert Kromm and his team mates could thus already accomplish a sum of nearly 4’000 € for the young talents that ate being grown up in Germany‘s capital city.

To read more volleyball news from this country click on Germany.

GER M: Friedrichshafen one step to the...