Germany came back from a loss Friday to beat Russia 3-2 during an incredible performance. Denis Kaliberda and Nikolay Pavlov were the top scorers. For more latest volleyball news visit worldofvolley.com 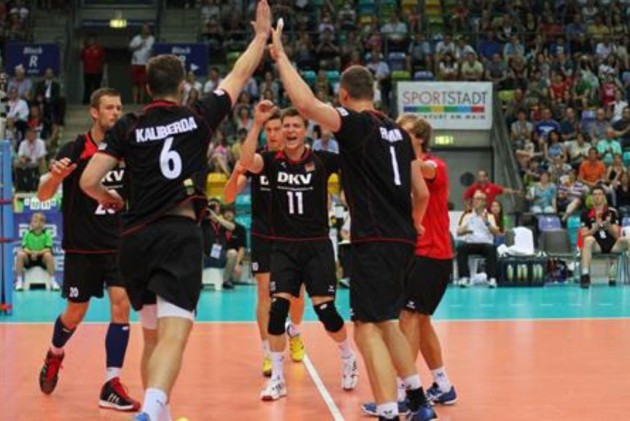 It was a tight game the 3,200 spectators saw in the first set. Both teams played at an equal level in the early phase as they tied (7-7). However, the German players were better in response to the ball and took a three point lead (21-18) in crunch time. For the Germans it was the key to success. The Russian Team wasn’t able to catch the advantage and lost the first set. Lukas Kampa decided the set with a block (25-21).

In the second set, Russia started strong and claimed a 8-7 advantage until the first time out. However, Germany wasn’t impressed and fought back, as Denis Kaliberda scored five points in the second heat. Russia had no response, so the German team seized the second set (21-19), to get ahead 2-0.

The score matched Friday’s after the second set, in the third set, the Russians moved to the front with a brilliant start (9-2) and increased their performance. They pressured the host with strong attacks and their serve. Germany could not compensate the disastrous opening, allowing Russia to secure the win (25-18).

Russia became better in block and attack, and the German players offered problems in the defense (16-12). A four-point run (16-16) couldn’t prevent the equalizer (25-23). In the tiebreak, both teams tried to set the killing shot. It was Denis Kaliberda who cared a two-point advantage (7-5). However, Germany wrapped it up to 18-16 and finished a dramatic set after three failed match balls.

For Germany, Denis Kaliberda was top-scorer of the game with 23 points. On the Russian side, Nikolay Pavlov scored 22 times.

With the win, Germany’s team (14 points) racked up the line to Italy (19 points), and has the chance to catch the Italian team with another win next week.