Schwerin, Germany, February 20, 2012. SCHWERINER SC and the provisional leader of the Bundesliga, Rote Raben VILSBIBURG, crossed their ways this past weekend in the national league before they meet up again next March 4 for the final of Germany’s cup at “Gerry Weber Stadium” in Halle/Westfalen. 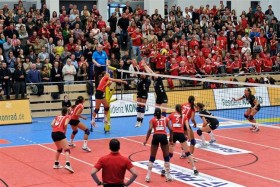 SCHWERINER SC opened strong there with some great blocks helping dictate the pace in the first set.

However, Rote Raben stormed back by taking set 2 and even though the guests from Schwerin had initially set the tempo in the third section of the game, the group coached by Guillermo Gallardo could eventually go for the provisional 2:1.

Rote Raben slowed down the pace in set 4 and SCHWERINER SC could easily call for the tie-break, where they could stand the pressure delivered by some 1’700 home fans and eventually seize the day.

“In my opinion SCHWERINER SC has got the best individual players of the Bundesliga and so I do not feel any shame for losing this match” commented the head coach of Rote Raben at the end of the game.

After taking this great revenge and before SCHWERINER SC and Rote Raben battle for the trophy of the national cup in a couple of weeks, the group around team captain Julia Retzlaff will re-start its European campaign by joining the Challenge Round of the 2012 CEV Cup and playing there Italy’s Yamamay BUSTO ARSIZIO.

The first game is scheduled for Thursday, February 23, in Italy, with the return coming up a week later in Schwerin after another round of the Bundesliga where the players mentored by Dutch head coach Teun Buijs will play host to VT Aurubis HAMBURG.

RUS: Krasnodar and Ufa in the quarterfinal. Two challenges to the playoff