Constanta, Romania, February 20, 2012. Romania’s Tomis CONSTANTA will be playing this Wednesday Maccabi TEL AVIV of Israel in the 1/4 finals of the 2012 CEV Volleyball Challenge Cup – Men. 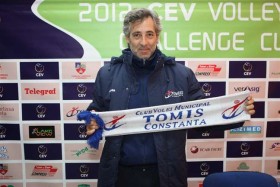 Only a few days before this clash, the club informed the media and the local Volleyball family that Jorge Cannestracci and Razvan Parpala will be at the helm of the team for the remainder of the season, after parting ways with the duo composed by Martin Stoev and Viktor Karagiozov.

Cannestracci is a well-known personality in Constanta as under his guidance the club claimed the national league and Romania’s cup back in 2007.

“I am pleased to be back here as I still have fond memories from a wonderful 2006/2007 season. As for the match with Maccabi, I think this will be a tough one especially as the Israelis have stepped up in recent years” he says.

“Maccabi is a team whose roster includes many experienced players and I am sure they are coming to Constanta with the intention to score a win” adds the team captain of Tomis CONSTANTA, Radu Began.