Friedrichshafen, Germany, December 9, 2011. As they recently edged BERLIN Recycling Volleys in the last round of the Bundesliga, VfB FRIEDRICHSHAFEN sky-rocketed to the top of the charts that sum up all facts and figures since this competition was introduced back in 1974. Via this result the club from the Lake of Constance cruised past Leverkusen/Bayer Wuppertal/Titans with a total of 750’278 points amassed through 375 wins and 139 defeats in 28 years. 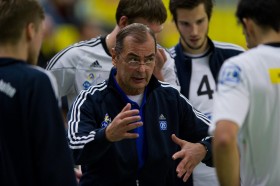 Since Stelian Moculescu started coaching the team back in 1997, the club has played a total of 343 matches in the Bundesliga – including the Playoffs – totaling 313 wins and only 33 losses.

Moculescu has hence a great ratio (90.35%): “This is not bad” says the Romanian-born head coach.

He still has got sweet memories from his debut: “That should have been against Fellbach. We lost the first set there and the atmosphere got icy in our old sports hall. Fortunately we turned the score around and won the game 3:1, so we had a happy end” he recalls.

He still has some more memories to share: “Once we scored a 15-0 against Wuppertal that used to be one of our major competitors by that time. I remember we achieved the same as we played BERLIN and another time we stamped a 15-4. They did not score at all for at least 45 minutes”.

“It was a sensational match for our supporters” says Brazilian spiker Idi. “We did never give up and that was the key for our success”.