Germany made the last step to the final of the 2014 CEV Volleyball European League - Women with 3:0 (25-22, 25-12, 25-11) victory over Pool B’s bottom-placed team of Greece. In front of 1,824 spectators the German team showed its home crowd a strong performance and can no longer be caught up with by its chasers in the standings. 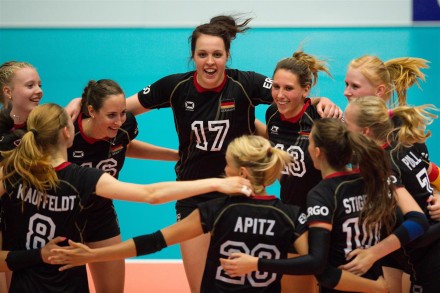 Lena Stigrot and Jennifer Petkke contributed 15 and 10 points, respectively, to Germany´s victory and became the best scorers of the match. Greece’s Evangelia Chantava followed with 9 points.

Giovanni Guidetti, head coach of Germany: “The final was not our aim. The goal was to set in young players in a high level and give them match practice.  This challenge worked very well and the fact that we also reached the final is a great extra.”

Ioannis Kalmazidis, head coach of Greece: “We managed it close in the first set, but in the end some details made the difference and kept the momentum to the German side.  After that we lost our energy in the second and the third set.  We have to increase our performance in all aspects of the game on Sunday, especially in passing the ball and in our attack.”

Lena Moellers, captain of Germany: “We are happy that we won the game in straight sets.  At the beginning we were a little bit nervous, but after the first set it became better and better.  To reach the final with this young team was not to be expected, but not impossible.”

The second match of the weekend between the two teams will take place at the Wiedigsburghalle in Nordhausen on Sunday, starting at 15:00 local time.