Germany trounced Chinese Taipei in straight sets (25-11, 25-15, 25-15) to claim their second victory in Pool B in the FIVB World Grand Prix in Santo Domingo, Dominican Republic on Saturday. 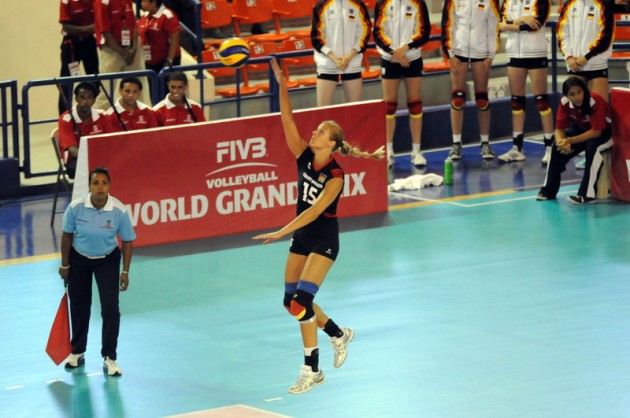 Germany put on a volleyball clinic with consistent execution in all facets of the game while Chinese Taipei made a big effort to compete against a superior opponent both in size and technique.

Germany held a big advantage in the aces department 12-3 and also in the blocking category 8-2.

Maren Brinker and Margareta Kozuch led Germany with 14 and 12 points respectively while Christiane Furst added nine. Teng Yen-Min was the best of defeated side with 10 points.

Germany jumped to an 8-1 lead on the shoulders of Kozuch and Furst. Brinker scored three in a row with two blocks around one spike extending the gap to 12-1. The second technical stop arrived with Germany in front 16-5. Kozuch continued with her attack increasing the distance to 20-7. Ssuschke scored with a big spike and Meier continued with two aces for set point at 24-10. Teng scored her fourth point of the set with a solid smash before hitting one too long for a final score of 25-11.

Kozuch followed an opponent error with another spike from her arsenal to give Germany the lead 8-6 in the second set. When play resumed Furst served one ace and Ssuschke hit a smash down the middle forcing a time-out. Furst served two more aces following a block from Ssuschke. Teng cut the distance to 14-9 with a huge spike but Beier and Brinker answered from the other side with two cannon-shots for 16-9. The set concluded 25-15 with a block from Furst, a spike from Brinker and a Chinese Taipei offensive error.

Chinese Taipei took a 3-0 lead following spikes from Teng, Tsai and Wen. Germany tied at 3-all following a series of opponent errors. Brinker served one ace for the 8-6 advantage. Kozuch increased it to 9-6 with a cross-court bomb. Germany went to the second technical time-out leading 16-10 thanks to their serve and blocking game. Matthes scored point 20 for Germany while Burchardt registered the last two for the 25-15 final.

FIVB M: Bulgaria at the Olympic Games with three victories in Sofia

GER M: 12 the round preview