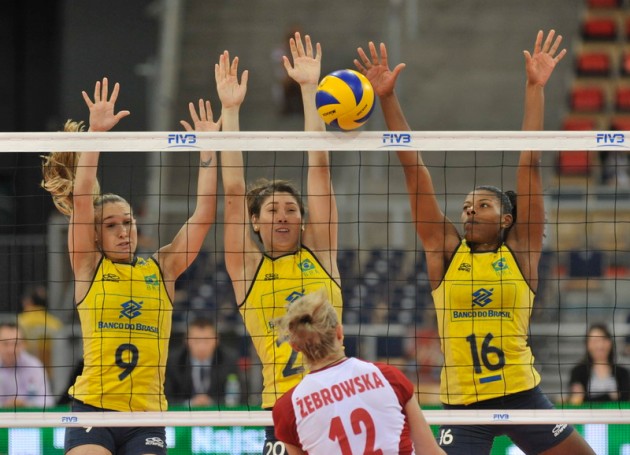 The win rounds off a successful weekend for Brazil who came through three tough five-set matches.

Fernanda Rodrigues led Brazil with 18 points, while the Poles‘ top scorer was Katarzyna Skowronska–Dolata with 13 points.

At the beginning both teams had ups and downs. From 5-5 Brazil won five points in a row. Then Poland reduced the defecit thanks to some solid blocks from Agnieszka Bednarek–Kasza and Katarzyna Skorupa. But Brazil played smarter, more carefully and with patience as they held onto the lead to take the opener.

Despite Brazil‘s regular, solid block the hosts spikers found a way to score. Zebrowska, Karolina Kosek or Katarzyna Skowronska–Dolata were spiking through their opponents fingers. However, the eight-time World Grand Prix champions refused to relinquish control with good service and powerful kills from Fernanda Rodrigues and Tandara Caixeta helping wrap up the set.

Poland took a quick lead in the third but Brazil answered with double and triple blocks on Kosek and Kasprzak and tied 7-7. The South Americans then dominated in every way possible, with having 14 blocks and six aces in the first half of the third set. However, the Olympic champions reception was faltering and Poland took advantage to take a 22-18 lead. But Zebrowska’s and Berenika Okuniewska’s faults helped Brazil to tie  at 23-23 before Okuniewska ended the set with a powerful kill, giving Poland victory.

Brazil continued to spiral out of control in the fourth with Poland scoring five unanswered points. The hosts continued to play with passion and strong belief, encouraged by loud applause from their fans. They took the set to set up a tie-breaker.

Poland begun aggressively, leading 5-1. But Brazil tied 6-6. Both teams stayed very close, but it was the South Americans who ended on top to remaine unbeaten.

BRA M: William made set from the...