FIVB M: Bulgaria at the Olympic Games with three victories in Sofia

Bulgaria fulfilled their dream to play at the London 2012 Olympic Games, making the final step – victory over Egypt. 10,000 people in Armeec Arena Sofia cheered the Balkan Lions to defeat Pharaos 3-1 (25-16, 25-18, 20-25, 25-12). President of the State Rosen Plevneliev, vice Prime Minister Simeon Dyankov, Ambassadors and Members of the Parliament whitness so longed victory of Bulgaria. 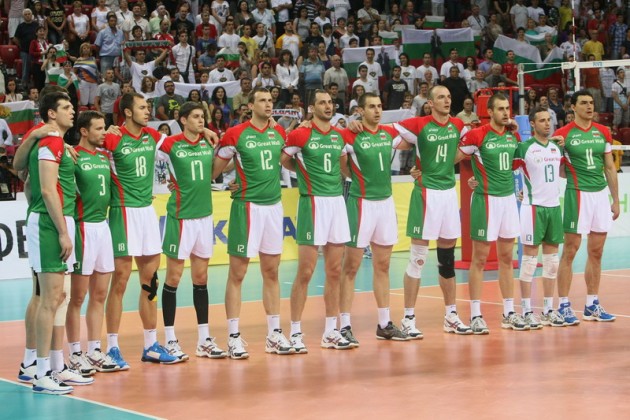 With no extra efforts, Bulgarians overruled Egypt hopes for something more in this FIVB Olympic Qualification Tournament. Hero of previous day Todor Aleksiev, omnipresent Matey Kaziyski and proving his qualities Tsvetan Sokolov were the killers of Pharaos‘ enthusiasm. Hosts had a flying start in the first set and 8 point advantage at the first technical timeout 16-8. This was enough to close the set at 25-16.

Egypt tried to give some hard time for rivals in the second, but their power was enough only for equalizer at 9-9. Some nice spikes by Sokolov overruled the effort of setter Abdalla to keep his team’s play steady. At the end Kaziyski scored some killer serves and that brought Bulgaria with two set lead.

The African team took the lead for the first time in the match in the third set 1-5 mainly because of opponent errors and lack of concentration. Advantage was taken by Sherif Elshemerly‘s boys and never left until the end of the set. Smooth Abdalla‘s moves provided best ball for Egypt‘s spikers to smash Bulgaria‘s resistance – 25-20.

Having no time to lose before celebrating qualification to London, Balkan Lions started fast and furious the last one. Even without the main setter Zhekov and Aleksiev resting, hosts marched confidently to the victory. The same story of the first two sets came on the court – 16-8 at the second technical timeout and Bulgarians were unstoppable. 25-12 was the least Egyptians got for farewell.

The end of the campaign – two qualification tournaments in Arena Armeec in 40 days, came at 9-1 victories for Bulgaria and the 8th Olympic visa in the history of country’s Men’s Volleyball.