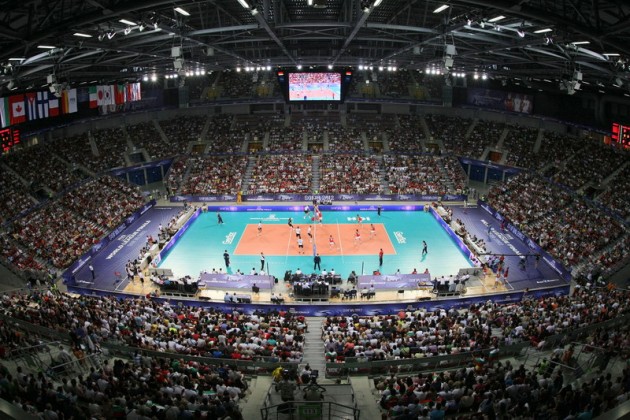 A life after Stoychev, Kaziyski, Zhekov, appeared and it was proven right by those players who were not considered important until now.

It all started well for Bulgaria. Having fantastic FIVB Hero Tsvetan Sokolov on the line in the beginning, the hosts started really well, then it all tied up and remained that way until the end. One astonishing Georgi Bratoev opened not only the play but was giving the Germans a hard time at the block. At the end of the set Gyorgy Grozer and company were happier, succeeding with the first set ball they had.

The hosts revived in the second set and with seven blocks killed all the ambition of Germany. Sokolov already had 13 points, but the Germans followed with Marcus Boehme and Grozer – nine each. That was the moment for Todor Aleksiev to wake up and with some smashing serves and strong spikes, lead Bulgaria to the equilizer- 25-19.

The incredible turnaround, fantastic defensive plays and many explosive spikes contuned in the third set. Germany started furiously and gained an advantage of several points. Grozer, Max Gunthor and Bohme were smashing hard and set the impression that this will be one fast match. This was not the case though as Bulgaria coach Nayden Naydenov and his captain Vladimir Nikolov struck back. Nikolov hadn’t touched the court in the first two sets but replaced Sokolov and revived Bulgaria. Balkan Lions were losing four points, and Nikolov scored six to give the winning spirit in the team. The drama of the first set returned in the end of this. This time Bulgaria was luckier to have Todor Aleksiev on its side to bring the victory 29-27.

Wings of faith brought host far away in the air in the last part of the match. Nikolov and Aleksiev formed a fantastic duet, literally smashing Germany to the floor. Assisted by middle blocker Yosifov and Todorov, Lions were unstoppable. It looked as the only points guests score are coming from unforced errors of Bulgaria. The triumph came with a lot of premium volleyball from both sides but the Lions were victorious – 25-19.