On Saturday evening rises one of the most exciting duels of German volleyball. Rote Raben Vilsbiburg meets Dresdner SC. Myrthe Schoot used to play in Vilsbiburg , and now she is a pert of the Dresdner’s team. Read the latest news from volleyball world on worldofvolley.com. 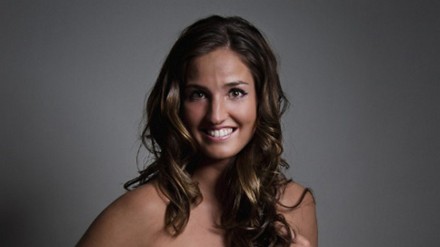 Ms. Schoot, you just came from training. The atmosphere was good after the tie-break win in the Champions League against Dabrowa Gornicza sure?

Yes, the atmosphere is great, but we already refocused on the game in Vilsbiburg. The success in the Champions League was great, but that was yesterday, now we have to keep working.

Was it your first victory in the Champions League?

No, the second. I have played in Holland in Amstelveen also Champions League and we have also celebrated a victory against Perugia.

You actually play on the outside-receiver position, but you are currently replacing Kerstin Tzscherlich as Libero. Can you imagine the long term?

In the Dutch national team I play libero, so of course I am happy that I can currently play in Dresden.

On Saturday night, you play the top match against Vilsbiburg. What are your feelings regarding your former club?

I’m looking forward to see them again. Vilsbiburg is a great club, the people are nice and I have great memories of the atmosphere in the hall. I am curious how the return will be, there are so many new girls in the team.

When Dresden and Vilsbiburg compare what distinguishes the two clubs?

Vilsbiburg is a contemplative place, all the people there know each other. When i lived there, I was approached on the street constantly. People know everything about us. Here in Dresden I can walk, without being detected. And the mentality of the coaches and players are different.

Your new team is playing constant at a high level, despite many young players.

True, we have played in a lot of preparation, tried many things and have worked steadily to us. We need each other, and we know that.

Why did you decide after just one year to pass from Vilsbiburg to Dresden?

Vilsbiburg and Dresden are both major clubs. I waited with the decision because I liked to play libero. The choice fell on Dresden, because I can play in the Champions League.

Was the fact that you can play together at DSC with two teammates from the Dutch national team important?

It is great that we are here together, and speak Dutch between each other.

Half of the Dutch national team now plays in Germany – coincidence?

The German league is simply much stronger than the Dutch. So it stands for the reason that the Dutch women go to Germany. The language is similar and also the mentality. It is beautiful and important for us to play here in Germany.

ITA M: Baranowicz – “We can give a game to Piacenza”

#IAMINBERLIN: All teams have arrived in Berlin...