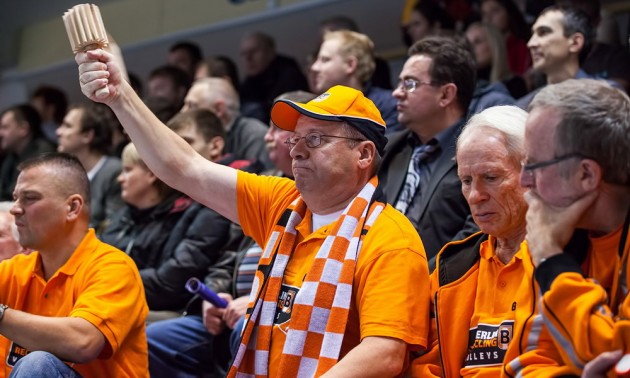 Although their team was supposed to be defeated by the clear-cut favorite of Pool B, six fans of BERLIN Recycling Volleys shouldered the travel strain of their Siberian ten-hour journey. “This number is simply phenomenal”, Bernd Paul, one of the very first members of the real fan base of the 2012 German national champions, says. Travelling with the team for ten years he has accompanied the players in 160 matches, but had never experienced a comparable journey and reception on-site. Escorted by the local police, the fans together with their team made their way through the Novosibirsk traffic jam to the competition hall. “That was definitely a new experience”, he notes. Dressed in the team’s colors, Bernd Paul and his fellow supporters brought some additional shirts to Novosibirsk that they gave to the members of the consulate general. “They cheered for our team – that helped us be heard in the arena”, Paul remembers. Eventually 19 fans supported the BERLIN Recycling Volleys and saw a match that did not go off as expected.

Being physically inferior, the side of BERLIN put up much resistance against the Russian Cup winner, not being ruffled as Lokomotiv  took a 16:10 lead in the first set. Led by a service series of Robert Kromm, BERLIN came back and pulled ahead (18:17), but could not claim the first set (24-26). In the second set, the Siberians showed their potential (19-25), whilst the third set was evidently tight. With their clever play, BERLIN claimed this round (29-27) but was eventually not able to win another set which would have signified a well-deserved and important point in Pool B. After a tough fight, NOVOSIBIRSK took the decisive set (22-25). “We won one set and put up a very good performance in two more, that’s much more than we could have expected” club President Kaweh Niroomand says.

For the away match against Jihostroj CESKE BUDEJOVICE scheduled for December 12, Bernd Paul and his fellow supporters will again travel along with their team. “This will only be a 500 km journey”, he smiles.

MEVZA M: 2 points in Hungary for the Bratislava