Düren, Germany, January 14, 2012. After struggling with multiple injuries, one of Europe’s finest middle blockers of the past decade, Stefan Hübner, recently announced his decision to retire from competitive Volleyball. 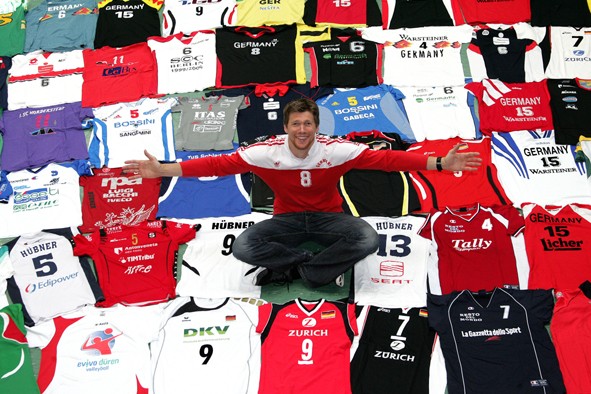 “It was a tough decision as I wanted to finish my career with the 2012 Olympics in London but my body did not agree with this wish” he says.

Hübner – who debuted for Germany’s national team back in 1995 – enjoyed a great international career and he also captained this side for a long time. After standing out in the Bundesliga, he had decided to take up another challenge and move to Europe’s Volleyball “Mecca”, Italy.

After spending his first season in the second division with the team from Loreto, he moved up to Serie A1 by joining Bossini MONTICHIARI and backing up his reputation as great middle blocker.

He was nicknamed “Il muratore” because his block looked like a kind of concrete wall for all of his opponents. Hübner did already struggle with physical problems earlier in his career, missing the home European Championship in 2003 and sitting out for the complete 2005/2006 season.

However, as long as he was healthy and fit, he regularly was part of the “All Stars” team that played annually a very special game with Italy’s national team. He returned back to Germany in 2010 re-joining also the national team. He missed the first half of the past season but made a strong comeback in early 2011 for evivo DÜREN and played his last professional Volleyball game this past October. He first injured his foot and then – while recovering – started suffering once again from knee problems.

“I am proud to say that I got back to competitive Volleyball after recovering from many injuries” he says. “Unfortunately this seems to have turned into a mission impossible this time. I feel like I do not have any longer the energy that is required to keep fighting for some months with the final outcome being very uncertain” so he motivates his retirement.

He will nevertheless remain loyal to his sport. “I have realized that Volleyball coaching is something I like. The preparation and careful analysis were always part of my life as a player and I think that I know what shall be transmitted to other guys”. Hübner partially helped evivo DÜREN as he was forced to miss the 2005/2006 season and it looks like the 36-year old will soon debut as a coach.