The home heroines of Greece needed only 59 minutes to cruise past Denmark in straight sets to start out their European campaign with a very encouraging performance. The game was a special present for middle blocker Ioanna Gkountimenko who turned 16 today. 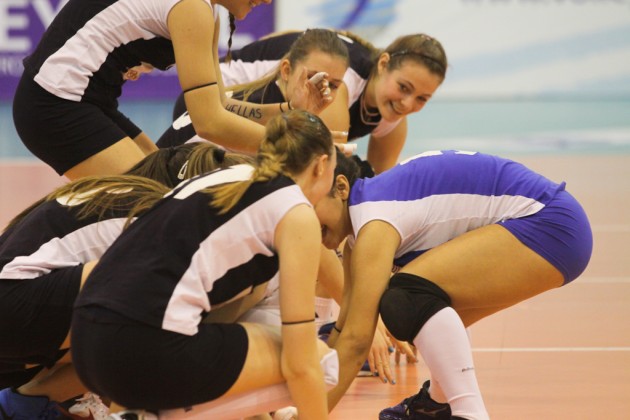 Greece scored 18 aces and killed 10 blocks in a game that was literally one-sided. After storming to the provisional 11:6, the home girls eventually pocketed the first set with the score of 25-14 and that result was repeated in the second section of the game as Greece was anchored by Anthi Vasilantonaki, Olga Strantzali and Anna Kalantatze. In the third set Denmark evidently struggled to display some consistency in reception and Greece’s head coach Dimitris Floros could eventually rest some of the players included in his starting six, but this did not help the opponent side score more than six points in the end.

“We got rid of the stress associated with the first match by scoring an easy win. We delivered a good performance, especially in serving, so we can start with the right confidence our preparations for the next match with Azerbaijan” says Greece’s setter Lamprini Konstantinidou. The game was a special present for middle blocker Ioanna Gkountimenko who turned 16 today and received a cake from her teammates at the end of the match.