PAOK made a major break already at the start of the semifinal series against Olympiacos! 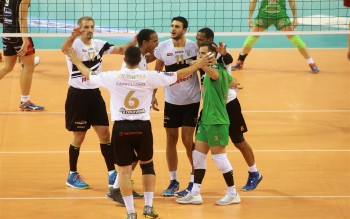 They have already lost two trophies against the same rival and on the same way. PAOK got defeated by Olympiacos both in the League Cup and in the Greek Cup, after simply unbelievable comebacks made by the Piraeus side. However, the time has come for the revenge of the Thessaloniki giant.

PAOK defeated Olympiacos on the road in the Game 1 of the semifinal series! The black and whites have therefore taken over a home court advantage in the series and you all know how much it is important in Greek volleyball.

In the second semifinal pair, Kifisias defeated Foinikas Syros after a tie-break!

POL M: Asseco Resovia triumphed in Gdansk! They will now cheer for Bielsko-Biala!