GRE M: Transfer of the decade in Greece – Agamez signed with Olympiacos!!! 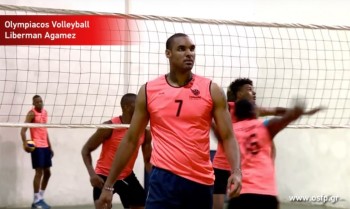 It is official. The player has already given his statement for the Olympiacos website:

“Greece is my second home. When Olympiacos offered me a contract I accepted immediately. I am coming to the ambitious club, whose goals are to win all trophies in the next season,” said Agamez.

This is definitely the biggest volleyball transfer in Greece in the last 10 years, if not the biggest ever. The reason is quite obvious. Liberman Agamez used to play for Panathinaikos, the fiercest rivals of Olympiacos, and he was one the best players of the Greens in the recent history.

He was so popular among Panathinaikos fans that the club even called him to attend the big Athens derby 2 years ago!

From the next season, he will once again be part of that big rivalry, but this time he will be on the Red side…

He was injured most of the time at Galatasaray. He was a dissapointment like all of the team.

Galata had a bad season last year.Do you believe Agamez was your biggest problem?

Come on. If we had to call transfer of the decade would be cepeda or lee. No this guy.

Greeks are lost in history,Agamez-Gomez was nice rivals before 7 years.They were very bad in Tur last season

You are very lost in history. You are right with Agamez, but Gomez was 2 best score in Turkey last season. By the way we won the cup and league with Poak 2 season ago. In my opinion Agamez was one more player in the Panathinakos history. Gomez and Dante are the best foreigners by far in the greek league @Akis

Great move! All Olympiacos fans are delighted! If he stay healthy will be a God in Greece! Anyway Olympiacos is strong again!

@Kostas We were like you last year. Agamez underperformed at many critical matches and he had many injuries throughout the season. I hope that you have a great season with him. Greek league is not so strong as Turkish league. That may help Agamez health condition. Good luck…