The big derby of the Italian Men’s Volleyball Championship between Itas Trentino and Leo Shoes Modena, valid for Round 21 of the 2019/20 regular season didn’t betray the expectations. 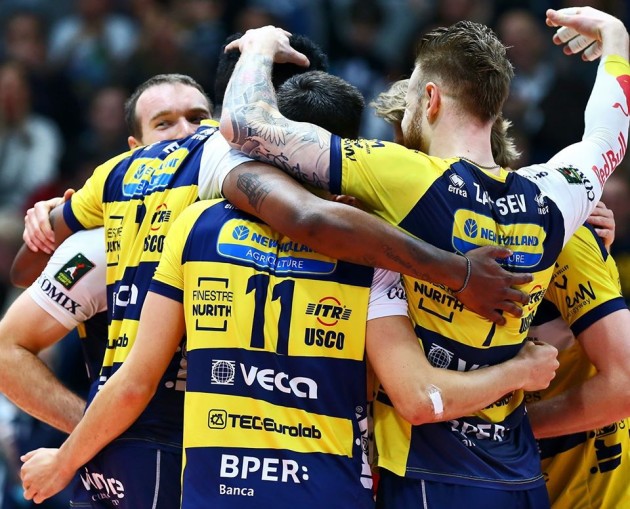 In the match of Round 21 of the 2019/20 SuperLega Credem Banca regular season, held at a soldout BLM Group Arena (4,000 spectators), third-placed Modena beat fourth-placed Trentino to separate from them in the charts to eight points: 3-1 (25-20, 21-25, 27-25, 25-22). Modena extended their overall winning streak to 10 games and seven games in the championship. At the same time, the team coached by Andrea Giani conquered the court in Trento after nearly four years. The last time Modena beat big rivals at their home ground was in Game 4 of the playoff semifinals in 2016. Ivan Zaytsev top-scored for the winning side, who had as many as five players in double digits in scoring, with 17 points. American Maxwell holt made an 83% attack (10/12). His compatriot Aaron Russell highlighted Trentino with 21 points.

Sir Safety Conad Perugia continued their monstrous winning streak of 21 games overall and 15 in SuperLega! Vital Heynen’s side remained leaders in the charts with, having the same number of points as Cucine Lube Civitanova (also victorious today) but one win more. Allianz Milano broke their three-game losing streak as they defeated Globo Banca Popolare del Frusinate Sora by a 3-1. 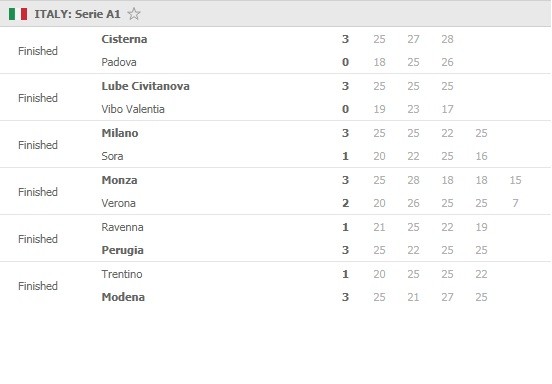 This was a terrific match to watch. High level players everywhere. Christenson is having the best year of his career in my opinion. Anderson was good early, Zaytzev was great late amd Holt was automatic in the middle.
Trentino needs a complete lineup soon. Russell was the best player this match for both teams. Whoever is going to get this him next year is going to be lucky.
Can’t wait for these playoffs.

Modena is on the roll. After Lube, they conquered Trentino and shown they will be formidable opponent in play-offs.
Something is wrong in Trentino land. Same players as last year but much worse results. Something will have to change soon, either results or coach…

COPPA ITALIA W: Everything is ready for...