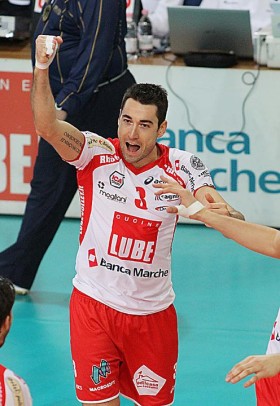 Cristian Savani (Lube Banca Marche Macerata): “We are happy to get to this game having gathered a good victory in the Cup against Roma. I think we had a good performance in that game.

We’ll need more of the same to beat Trento, the serve will be crucial as usual, but also the attitude and determination. To win certain games, you have to fight throughout, stay focused from first to last minute.

Saturday’s game will be extremely important for us, because we want to catch them at all cost”.

Matey Kaziyski (Itas Diatec Trentino): “An important game for many reasons, the first is our position in the league table, the two teams that have gathered most points so far are facing each other, but there are many more points up for grabs. It’s a real test, that will tell us where we stand compared to Trento which have been are main opponent so far.

The first meeting between the two teams this season came in a particular situation. We were hardly back from Qatar, but it was still a very tight and hard-fought game. The scenario could be similar this time around.

No need to say this will be a very difficult one for us, we know that for sure”.

So sexy! Players of Busto are simply...