Energy Resources San Giustino, starting from next Sunday will have on the bench Henk Jan Held, Holland born in 1967, who was untill november a 2. coach of Dutch National Team, 2 years ago coach of the Dutch Youth National team. 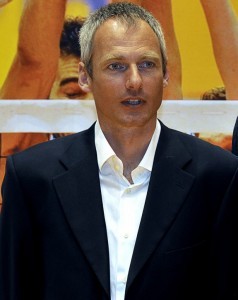 “I am happy to present you our new first coach”-confirms enthusiasticly the president of Umbrian club Claudio Sciurpa. I am sure that we have found a person  who has blood “bianco-azzurro”(white-blue)I was lucky to admire Held like an athleet (he played in Perugia in 2004/2005, and I am sure that he will not dissapoint us like a coach. We believe in this extraordinary person!”

Also a sport director Andrea Sartoreti knows him very well, because the two of them were sharing the same room during a course for the 3. coach they made together. “He is a person very equilibrate and motivated, he is respected from all of the players,he knows Rauwerdink, has also played with Finazzi, Cozzi e Giovi.  He has a great enthusiasm and I am sure he will pass to the team the feeling that they do not deserve to be the second-last team in classific. Held is arriving tommorow and will take the team towards the first game where he will be the first coach. Very difficult start for new coach because on Sunday in Palakemon Hall arrives the team who is first in classific, Itas Diatec Trentino

WHAT ARE HER CHANCES? Italian libero contests...