Since he became an Italian citizen, there has been numerous speculations that he’d eventually play for Italy. Sadly, it’s far from happening anytime soon. First of all, a few Italian players, ie Dragan Travica and Ivan Zaytsev, have been very vocal that they DO NOT want Juantorena on the team. 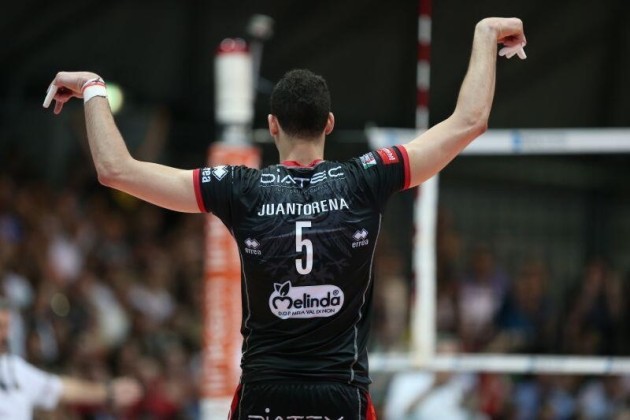 First of all, a few Italian players, ie Dragan Travica and Ivan Zaytsev, have been very vocal that they DO NOT want Juantorena on the team. Coach Berruto has also said less about the issue and on Osmany’s future with the national team.

Let’s face it, Juantorena’s presence on the team will for sure make a difference BUT will crush the egos of some of the current players. He is one of the world’s best outside hitters whose presence in international volleyball was cut short due to Cuba’s policy which limits their players from playing professional volleyball and making more money abroad.

This policy is the ultimate reason why Cuba has lost its glorious days in international volleyball.

A few days ago, Trentino’s Diego Mosna was asked on Osmany’s future with the Italian national team.

“It’s only a matter of time.

Osmany’s situation got complicated because of the uproar of debates from several people. Os is a true champion and therefore the risk of getting ‘hated’ from affected individuals is very high but that’s part of the game. Words are no good in this situation.

The athlete is very well known all around the world. His main concerns are his family living in Cuba and his freedom to visit his country anytime he wants will be affected in case he plays for Italy. It’s a very tough decision to make and must be dealt with more discretion.”

ITA M: Not even Starović could believe...