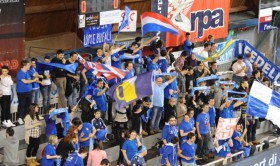 Andrea Sartoretti (Sport director Energy Resources San Giustino): “We’re facing Trento, the leaders. This is the team to beat in the league, and that has been the case for years. It’s obviously very complicated but nothing is ever written on court. We’ll try to play at our best. From now on every game will be like a final for us. We have to try to take points, even against Trento”.

Roberto Serniotti (ass coach Itas Diatec Trentino): “Another road game for us, in San Giustino. We cannot take anything for granted because I am certain this team is much better than the one we played against earlier this season. The arrival of the outside hitter Patak improved their situation tactically as well. They are currently in a bad position in the league mainly because of Starovic’s injury. This will be a difficult game, and it looks like we often have tough ones in this period, and there is a heated atmosphere there too. Considering the number of games we’re playing right now, we’ll have to find renewed mental energy more than physical in order to win it”.