A new experience for the Argentine Boys' Youth Team is coming to its end when they play this weekend on Saturday and Sunday their last two matches of the 2011/12 ACLAV A2 Senior's upgrading League at Cenard facilities facing Lanús and Ciudad. 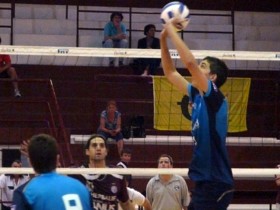 Lanús and Ciudad will be the last rivals

On Saturday at 20.00 they will face Lanus and on Sunday, at 20.30 Ciudad. It was at Cenard facilities that the young team won its first match during this competition that closes its regular season this weekend. The match ended 3-2 for the light blue – white jersey facing UPCN Chubut Voley.

The team coached by Fabián Muraco & Julián Álvarez comes from playing as visiting team in the very far south of the country, in Trelew, Patagonia v Chubut and then at the west of Buenos Aires city in Palomar v UNTREF, leader of the competition.

Lanús and Ciudad will play thinking on the next phase of the A2 competition while the young team fulfilled its goal of gaining experience and improvement looking forward to its demanding South American Championship – that qualifies for the 2013 World Championship.

Again it has been a great demanding national season, travelling, concentrating and having a weekly competition that requested the utmost of each participant of this team.