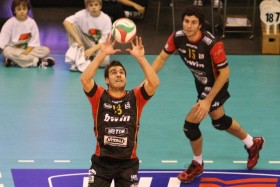 Roberto Piazza (coach Sisley Belluno): “Roma has now got its full squad. Zaytsev and Cisolla have been starters for the past few games which helped Roma find some consistency in the results. Besides, they’ll also have Sabbi and Bjelica who are back from injury. They will be up for it, because at the end of the first half of season, they wasted quite a few points, especially at home. We lost points as well, like in the last home game against Verona, and that should not happen again.”

“The attitude against San Giustino, especially psychologically, was good. There have been some mistakes but despite the fact we have been behind the team showed they could turn the sets in their favour. These are the progress I am expecting to see this Sunday” adds Piacca.

Andrea Giani (coach M. Roma Volley): “Roma and Belluno have had a pretty similar season. You could say their level of play is quite similar too. 8 wins for us, 8 for them, and 9 defeats each. It’s true that Belluno is four points ahead but that is only due to the rule regarding the tie-breaks. In terms of level of play or individual talent, I believe we are more or less the same. This means we have our chance and we can aim to win, like we did in Roma against them, it would be even better to avoid the tie-break this times as Belluno had pushed us to the fifth mainly due to our mistakes”.

Argentina: Time to host the third Grand Prix of the ACLAV A1 senier women league for the national junior women team