WGCHC M: “We made less mistakes than Russia, that was key” – said Birarelli 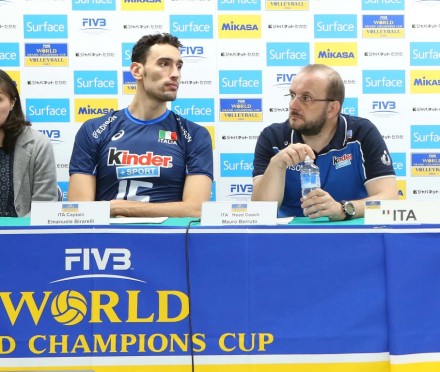 Italy’s captain was extremely pleased with his side, noting that they made less mistakes in this match, and that’s what made the difference. Italy will face Iran on Wednesday.

Italian captain Emanuele Birarelli: I’m really proud of my team. We deserve this victory against the European champions, a great team like Russia. We had some new players on this team, our wing spikers are young. I’m really happy that we could get this great victory for them. We had good spiking, and made fewer mistakes than Russia, and that was the key to this victory. We know it was a strange match, the first match of this tournament. But we played in the right way and I’m happy.

Italian coach Mauro Berruto: Of course it is always a great challenge to play the Olympic and European champions. We had the right attitude from the beginning of the match. We played with half of our starting six new, in Lanza, Piano and Kovar. I’m very proud of these three players especially, and we challenged Russia with good volleyball. Our side out was really efficient. For some moments they pressured better than us with their service, but I’m proud that we could play good volleyball and win the match.

What was good about Filippo Lanza’s play?:

Almost everything. He was efficient in reception, and side-out attack. He is the kind of player that I love because he always plays with a great attitude. He deserved this chance, and [capitalized] on it in the best way possible – said Berruto.