ITA M: The great derby is upon us!

We’re back in the league after a thrilling weekend of cup action with the quarter-finals. This weekend, the big game will put the leaders Macerata face to face with the Italian champions of Trentino. Perugia vs Verona is another interesting match. 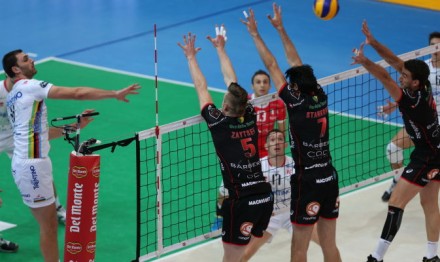 Macerata woke up from its nightmare that saw them out of the Champions League and beaten in the league by Perugia. They bounced back by knocking Cuneo out of the Italian Cup in the quarter-finals to make it in the final four for the fourth consecutive time. Trento has lost three times in the league so far, once was against Macerata but they are in great form: they’re doing well in all competitions: they qualified for the Champions League playoffs 6 and the cup semi-finals.

Dragan Stankovic (Cucine Lube Banca Marche Macerata): “After the cup victory over Cuneo here is another tough encounter. We’ve met Trento so many times in recent years, what’s important for us on Sunday is get back on track in the league to stay top, while they will try to move back up from their third place. I expect it to be a tough game, we’ll need to give it our best shot with maximum focus because Trento has been playing excellent volleyball”.

Filippo Lanza (Diatec Trentino): “Getting to this big match against Macerata and then the Champions League game in Russia after having obtained our pass into the cup final four and the nice play seen against Modena is really the best thing that could have happened to us. We’ll go there chasing more important points, we won’t have any pressure, we don’t have anything to prove. This is the best position to have mentally when you want to trouble such a great team like Macerata. It’s no wonder they have lost only twice so far in the league and on both occasions that was at the tie-break.”

Perugia and Verona are at it again four days after their cup quarter-finals. Kovac’s boys won it and will try to make the double to defend their fourth position from Verona’s assault. Verona will need a more convincing performance this time with Gasparini at his best to give a hard time to Perugia’s reception and blocking.

PAST ENCOUNTERS: 4 (All Perugia)

Carmine Fontana (Ass coach Sir Safety Perugia): “We met four days ago and know each other well. We’ll both be able to adjust with what we’ve seen in the last encounter. This will be another tough game, just like on Wednesday even if we won in straight sets, because Verona is a quality team and because it’s not easy to be ready in terms of psycho-physical energy just a few days after the cup game. We know Verona is good in the bloc-dig department, we’ll have to be careful not to get in trouble. Just like on Wednesday, our serve will be crucial to make it hard for their reception. This is a fundamental encounter because we could consolidate our fourth place and maybe start looking at who’s in front”.

Andrea Giani (Coach Calzedonia Verona): “This will be before all a great game to play. On Wednesday we’ve seen we could play face to face when we play at our best. And that’s what we need to do to have a chance. Perugia never make many mistakes, they can make various substitutions if the players on court were not to be effective. We have to make the best of the opportunities that will come our way, and use this game to make further improvements. We have our full squad, we have to put ourselves to the test”.

CL W: Novara won but together with...